Vocabulary should be taught not caught

The importance of vocabulary

According to Isabel Beck, in her book Bringing Words To Life, a large and rich vocabulary is not only the hallmark of an educated individual, but also helps one in becoming an educated person.  One of the main reasons that vocabulary facilitates learning is that it allows comprehension of the content being studied; the greater one’s vocabulary the easier one understands new content. Moreover, Beck argues, the greater one’s vocabulary the better one becomes at expressing one’s understanding.  In exams, students with limited vocabulary often suffer because they simply don’t understand the question.  For example, a colleague of mine once told me that her GCSE students were thrown by the exam question about Of Mice and Men: ‘Describe the futility of George and Lenny’s plans for the future’.  Although they had studied the theme of broken plans they didn’t know the word futility and therefore could not answer the question.

Which vocabulary is most useful?

Tier 1: most basic words which typically appear in oral conversations, e.g. table, chair, girl, walk. Students are exposed to these words frequently, from a very young age, so readily become familiar with them.

Tier 2: words which are of high utility for mature language users and are found across a variety of subjects, e.g. precede, systematic, conclude. As these words are characteristic of written text, and used more rarely in conversation, students are less likely to learn the words independently.

Tier 3: Subject or topic specific words such as meander, photosynthesis and are best learnt when a specific need arises.

The focus should, therefore, be on tier 2 and tier 3 words and, as the words are unlikely to come up in everyday contexts, the words should be explicitly taught rather than caught in the course of everyday conversation.

When it comes to teaching new words most teachers use dictionary definitions and short exercises such as cloze passages or matching words with definitions and synonyms.  The problem with these approaches is that, although students complete the exercises, they do not really understand the words and therefore have little command of them.  There are four main reasons why dictionary work is particularly weak as an approach for learning new vocabulary:

Because of these four limitations Beck and her team advocate robust vocabulary instruction which “involves directly explaining the meanings of words along with thought-provoking, playful and interactive follow-up”. The approach can be used with all children and young people, from Early Years onwards.  Instead of defining words they suggest ‘capturing the essence’ of them in a student friendly way.  For example the word tamper in a traditional dictionary definition might read: to interfere with something.  Capturing the essence, on the other hand would be to explain the word tamper as: If you tamper with something you change or damage something, often secretly, when you have no right to do so.

This can be done with even the youngest students:

Capture the essence: If you describe something as extraordinary, you mean that it is very unusual.

Example: It would be extraordinary to find a tiger in the classroom.

Resources to help with vocabulary

Our Curriculum Companions have a high emphasis on vocabulary.  Each knowledge web has a vocabulary section such as in the art example below: 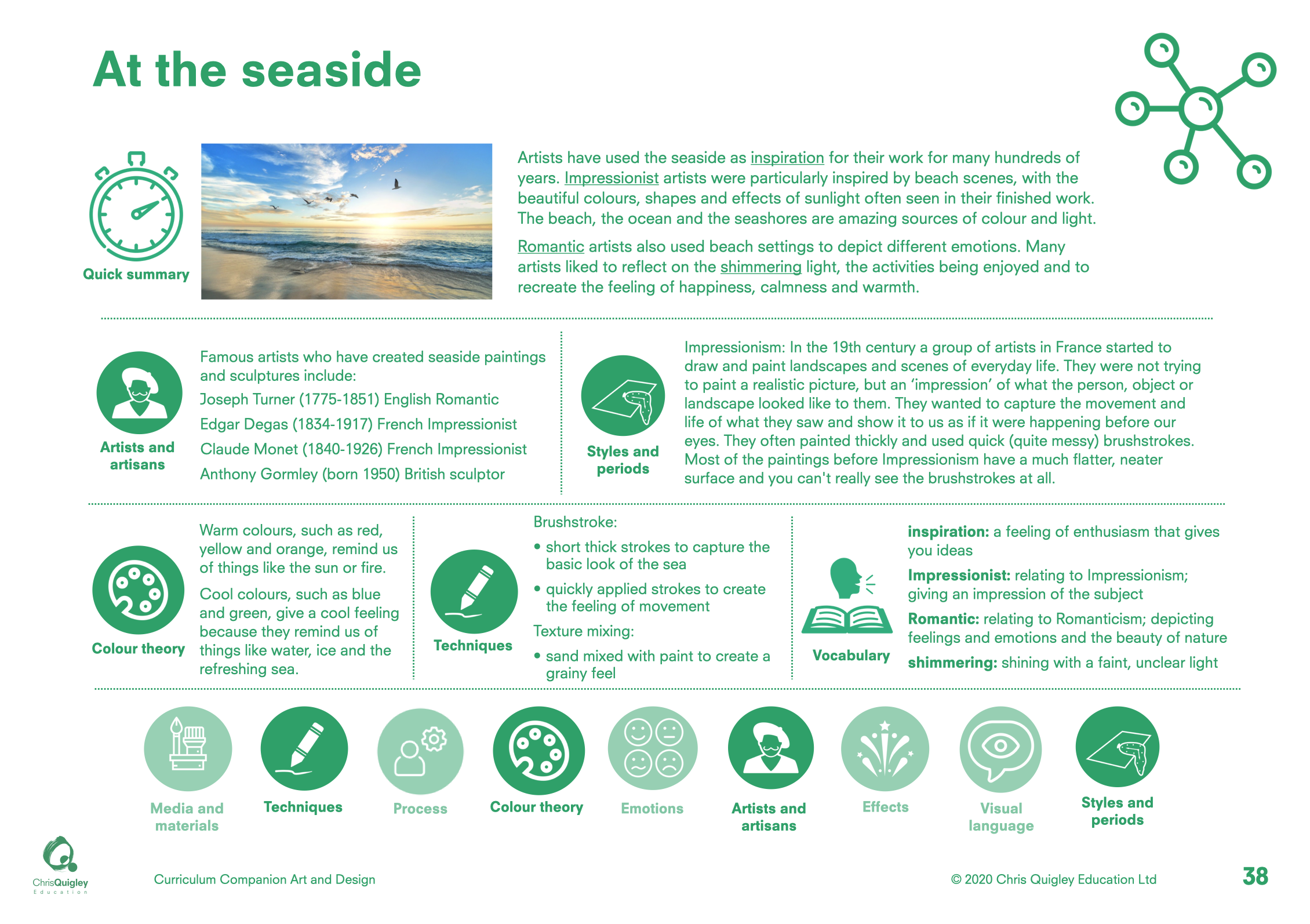 One of our aims with the Companions was to help students from the youngest age develop a rich and broad vocabulary to help them to develop a deep understanding of the subjects they study.

For further training in vocabulary our course Infusing Rich Vocabulary in the Primary Curriculum may be of interest.  Reviews of this course can be viewed here.

The term cultural capital was coined in the 1930s by the French sociologist Pierre Bourdieu. His theory of society was that inequalities stem from a...

The reason why subjects have endured so long in formal schooling is that they are groups of knowledge bound together by a set of big...

The problem with knowledge 'organisers'

Some basic principles of learning Learning is a change to long-term memory - the place where all knowledge is stored.  Three main types of knowledge...

Our website uses cookies so that we can provide a better experience. If you are happy with this, continue to view our website and close this notice.