Do your pupils give up easily?

Are your pupils resilient enough for greater depth?

Learning that sticks is desirable, but it is not greater depth.  That’s because greater depth describes a child’s depth of understanding, not the quantity of what they can recall.  Greater depth involves:

In other words, things children have to really think about – problems that are actually a problem.  Did you know that many ‘word problems’ are not a problem for children?  That’s because they are standard, routine things put into words.  Words don’t make the question a problem – it is the nature of thinking that is required.

Look at this, for example, – a Year 6 maths problem. 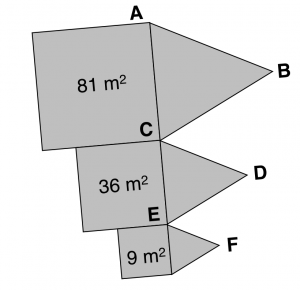 The CONTENT of the question begins with Year 1 – properties of squares, then we have Year 3 – equilateral triangles then we have Year 4- fluency in times tables and area of regular rectilinear shapes.  The only bit of Year 6 content is ratio.  There is, however, some hidden Year 4/5 content: equivalence of fractions which should be used to express the ratio in its simplest form.

How would your children cope with problems like this?  Would they want to find the answer?  Would they give up easily?

Do your pupils lack the resilience needed for greater depth?

How about this Year 2 reading problem, given to two very different children, along with their answers: 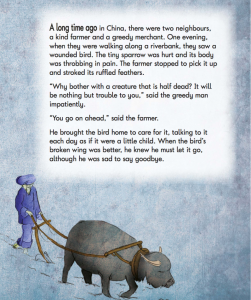 Teacher: ‘Which language features do you think make the first paragraph effective?’

Child 1: ‘ I like that there are some adjectives…like greedy and kind.’

Child 1: ‘They tell you about the type of people.’

Teacher – To child 2: ‘Can you say a little more about the adjectives in the first paragraph?’

After the first answer, the child spent six months learning how to be resilient, using the Secrets of Success: 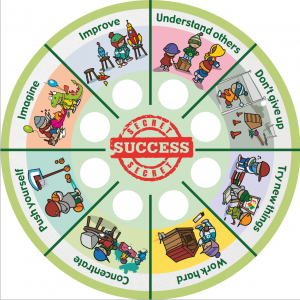 This gave the pupil the resilience they needed to:

Success does not come knocking on the door. We all need to go out and find something in which we can experience success. Finding something that we are good at builds confidence. Some pupils may not be good at the things they spend most of their time doing at school, which can make it even more important that schools have a broad and rich curriculum with something for everyone. As adults, however, we learn that just because we may be good at something doesn’t necessarily mean that we enjoy it. Successful people enjoy what they do. In fact, they love what they do. What they do gives them energy; work feels like play and time flies by. These are the lucky people who have found their energy zone. These people don’t need any external or material reward to motivate them; they do what they do simply because they love it.

This is something that most of us don’t want to hear. If we want to get really good at something there are no short cuts. Accomplishment is all about practise and hard work. Pupils need to understand the benefits of working hard. They need to know that work is good and not something that should be avoided. Many pupils become frustrated if they don’t accomplish something immediately. With a television culture of ‘overnight’ success, it is important to teach them that it may take hours and hours of hard work to become really good at something and that in real life success is not easy for anyone.

Children are living in the most intensely stimulating time in the history of the Earth. They are bombarded with images from television advertisements, websites, games consoles and mobile phones. It has never been so important to teach our children how to concentrate. Of course, every teacher will tell pupils of the need to concentrate, but few will teach them how.

To be really successful, pupils need to learn to push themselves. Most adults realise that if they want a healthier lifestyle, joining a gym doesn’t change much. We have to push ourselves to go to the gym. In fact, going to the gym doesn’t change much either if we don’t push ourselves when there. There are lots of ways pupils need to push themselves. For example, when they don’t feel like doing things, when they feel shy, when they think they might fail and when their friends are trying to stop them doing what they want to do. It can be really difficult to push oneself, but it is essential for success.

In 1968, George Land gave 1,600 five-year-olds a test in divergent thinking. This involved finding multiple solutions to problems, asking questions and generating ideas. The test results were staggering: 98% scored at what he described as ‘genius’ level. He then re-tested the same children at age ten, by which time the level had declined to 30%. By fifteen years of age, only 12% of the children scored at the genius level. The same test given to 280,000 adults placed their genius level at only 2%. In his book Breakpoint and Beyond’, co-authored by Beth Jarman, Land concluded that non-creative behaviour is learned.

The test shows what most of us know: children have a fantastic imagination, which mostly declines with age. This decline is the enemy of success. To help children to be successful we need to help them to keep having ideas as they get older.

Successful people are always trying to make things better. This doesn’t mean there is anything wrong with what they have but they know that there is always room for improvement. They try to make good things great. Rather than making any radical transformations, however, they tend to make lots of small adjustments. This is what we can teach our children: great things do not happen suddenly. They are the result of lots of tweaking and refinement. We can all make things a little bit better. We can all take small steps to greatness.

Aristotle made the distinction between what he called sophia and phronesis. Sophia was wisdom of the world – what came to be called science. He spoke of the importance of understanding how the world works. However, he also stressed that, in itself, this was not enough for civilisation to flourish. Society also needed phronesis. This was the application of this wisdom in the service of others. Thousands of years later, Aristotle’s words are just as true. Successful people use what they know to try to be useful to others. Instead of asking ‘What’s in it for me?’ they ask, ‘What can I give?’ If we look at a successful business, it gives people things they value, at the right price. If we look at a successful public service, it gives people what they value at the right time.

Successful people have bad luck, setbacks, failures, criticism and rejection but they always find a way around these problems. Children need to understand that if they have bad luck, they are not alone. Most of us tend to focus on the accomplishments of successful people rather than their mishaps or setbacks. We need to tell children about the times we failed, were rejected and criticised but also how we bounced back.

If you would like to find out more about learner resilience, its place in securing greater depth and how to build a growth mindset in learners, please join us in London on 30th March 2017

If you’d like more ideas for promoting greater depth, why not come along to our conferences on Securing Greater Depth?  You can read more and book a place here: http://www.chrisquigley.co.uk/product/securing-greater-depth-2/

How 'designed' is your curriculum?

From September Ofsted will be asking the question: "How is your curriculum designed?" What they are seeking to find by asking this question is:...

Continuous Provision in Years 1 to 6

One of the reasons children learn so well in EYFS is that some things are better learned than taught.  Continuous provision is such an...

How long do you spend preparing for inspection?

One of the most welcome recent announcements from Ofsted has been: Do not spend time preparing for inspection. If you want to watch a...

Our website uses cookies so that we can provide a better experience. If you are happy with this, continue to view our website and close this notice.